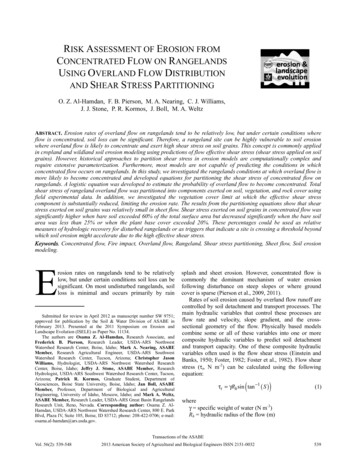 collected either in the laboratory (e.g., Li, 2009) or in rowcrop agricultural settings (e.g., Gilley and Weltz, 1995;Giménez and Govers, 2008).The objectives of this study are: (1) to investigate coverand flow conditions under which flow transitions fromsheet to concentrated flow, thereby identifying the limit atwhich the effective shear stress component is substantiallyincreased, thus accelerating the potential erosion rate, and(2) to develop equations that estimate the effective overlandflow shear stress by applying the Darcy-Weisbach frictionpartitioning method to field-collected experimental data forrangelands.MATERIALS AND METHODSSTUDY SITESThe data used in this study were obtained fromrangeland field experimental work by the USDA-ARSNorthwest Watershed Research Center in Boise, Idaho. Thework resulted in hundreds of experimental plots. The datawere collected from rangeland sites within the U.S. GreatBasin region and span a wide range of slope angles (5.6%to 65.8%), soil types, and vegetative cover (table 1). Manyof the sites exhibit some degree of disturbance and/ortreatments, such as tree encroachment, wildfire, prescribedfire, tree mastication, and/or tree cutting (table 1).Numerous rectangular plots (approx. 4 m long 2 m wide)were selected at each site, encompassing all treatments forthe respective site. Average slope, canopy and groundcover, and microtopography were measured for each plot(Pierson et al., 2007, 2009, 2010).MEASUREMENT AND CALCULATION OF HYDRAULICPARAMETERS AND EROSION RATEOverland flow was simulated on each experimental plotfor a range of flow rates over near-saturated surface soilconditions. Surface soils were pre-wetted by artificialrainfall immediately prior to overland flow initiation(Pierson et al., 2007, 2008a, 2009). Overland flow wasreleased from a concentrated source centered 4 m upslopeof the plot discharge outlet (Pierson et al., 2007, 2008a,2009, 2010; Moffet et al., 2007). Each inflow rate wasapplied for 12 min using a flow regulator. In the earlyexperiments (before 2006), the applied inflow rates were 3,7, 12, 15, 21, 24 L min-1, while they were 15, 30, 45 L min-1in the later experiments, with the exception of the Breakssite in 2004. The plot flow velocity for each inflow rate wasmeasured using a salt (CaCl2) tracing method. Aconcentrated salt solution was released into the fastest(as determined by visual tracer) flow path. The mean traveltime of the salt solution between rill cross-sections attransects 1 and 3 m downslope of the release point wasmonitored instantaneously with conductivity probes. Flowvelocity was calculated as the distance betweenconductivity probes (2 m) divided by the mean travel timeof the salt solution between the 1 and 3 m transects. Flowwidth and depth measurements at transects 1 and 3 mdownslope of the flow release were used in this study, inorder to be consistent with the velocity measurements.Flow dimension measurements at some sites were taken attransects 0.5, 1.5, 2.5, 3.5 m. In these cases, only dimensionmeasurements at 1.5 and 2.5 m were considered (AlHamdan et al., 2012). For flow path calculations, each flowpath cross-section was assumed to be rectangular in orderto achieve consistency in the data analyses (Al-Hamdan etal., 2012). Multiple depth measurements were taken foreach cross-section, and the depth was calculated as theaverage of these measurements. The average width, depth,and hydraulic radius (Rh) of each flow path for each inflowrate was then calculated as the average of means from eachcross-section. The hydraulic radius was calculated as:Rh APwet(9)where A is the cross-sectional area (m2), and Pwet is thewetted perimeter (m). In the rectangular cross-section case,Rh was calculated as:Rh wd( w 2d )(10)where w and d are the average width and the average depthof each flow path, respectively (m).Experimental runs resulted in two runoff categories:concentrated flow runs and sheet flow runs. Concentratedflow paths were separated from sheet flow by comparingthe hydraulic radius to the flow depth for the respectiveflow path (Al-Hamdan et al., 2012). If the flow path wastoo shallow, the depth of the flow would be negligible withrespect to the width. In this case, the denominator inequation 10 would be approximately equal to w, and Rhwould be approximately equal to d. In our data, if Rh and dwere significa

The circular topology of rhythm in asynchronous random .