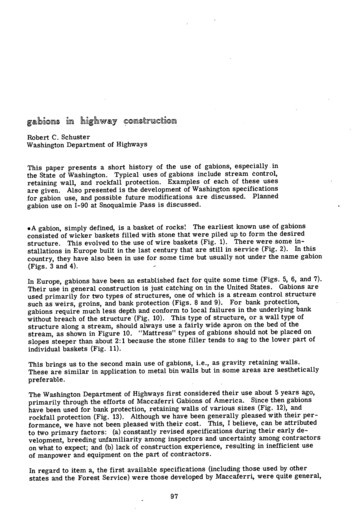 gabions Im llgllwiy c ci iiRobert C. SchusterWashington Department of HighwaysThis paper presents a short history of the use of gabions, especially. inthe State of Washington. Typical uses of gabions include stream control,retaining wall, and rockfall protection. Examples of each of these usesare given. Also presented is the development of Washington specificationsfor gabion use, and possible future modifications are discussed. Plannedgabion use on 1-90 at Snoqualmie Pass is discussed.sA gabion, simply defined, is a basket of rocks: The earliest known use of gabionsconsisted of wicker baskets filled with stone that were piled up to form the desiredstructure. This evolved to the use of wire baskets (Fig. 1). There were some installations in Europe built in the last century that are still in service (Fig. 2). In thiscountry, they have also been in use for some time but usually not under the name gabion(Figs. 3 and 4).In Europe, gabions have been an established fact for quite some time (Figs. 5, 6, and 7).Their use in general construction is just catching on in the United States. Gabions areused primarily for two types of structures, one of which is a stream control structuresuch as weirs, groins, and bank protection (Figs. 8 and 9). For bank protection,gabions require much less depth and conform to local failures in the underlying bankwithout breach of the structure (Fig. 10). This type of structure, or a wall type ofstructure along a stream, should always use a fairly wide apron on the bed of thestream, as shown in Figure 10. "Mattress" types of gabions should not be placed onslopes steeper than about 2:1 because the stone filler tends to sag to the lower part ofindividual baskets (Fig. 11).This brings us to the second main use of gabions, i.e., as gravity retaining walls.These are similar in application to metal bin walls but in some areas are aestheticallypreferable.The Washington Department of Highways first considered their use about 5 years ago,primarily through the efforts of Maccaferri Gabions of America. Since then gabionshave been used for bank protection, retaining walls of various sizes (Fig. 12), androckfall protection (Fig. 13). Although we have been generally pleased with their performance, we have not been pleased with their cost. This, I believe, can be attributedto two primary factors: (a) constantly revised specifications during their early development, breeding unfamiliarity among inspectors and uncertainty among contractorson what to expect; and (b) lack of construction experience, resulting in inefficient useof manpower and equipment on the part of contractors.In regard to item a, the first available specifications (including those used by otherstates and the Forest Service) were those developed by Maccaferri, were quite general,97

100and, understandably, were written around their product, tending to exclude competitorssuch as American Gabions of Browning, Montana. Examples of this are a requirementfor a hexagonal triple twist mesh, wire specifications obviously written around a foreignproduct, and a load test that could not be met by a rectangular mesh. Maccaferri andBaekart gabions use a hexagonal mesh, whereas the American Gabion and projectfabricated gabions use a rectangular, nonclimbable fence mesh. Our interest, therefore,was to write a specification that was broad enough in certain areas to allow variousmethods of manufacture, yet ensure a satisfactory end product. This included referenceto nonmetric measurements, a new load test, reference to standard federal wire specifications (QQ-W-461), and revision of some construction details. Also, our standard "noforeign product" specification had to be rescinded to allow the standard foreign gabion.During this process, several gabion installations in neighboring Idaho (Fig. 14) and an extensive gabion operation in Colorado (Fig. 15) were visited. Much helpful information wasgleaned on problems in Idaho and Colorado and suggested solutions. One of the big problemswas cost, primarily because of the large amount of hand work in the then-accepted practice of hand-placing the stones at the face of the wall. We resolved to avoid this if wecould. Another big problem was failure to specify a minimum density of the gabions orto determine the probable density of the material to be retained. This had, in at leastone case, resulted in the failure of a wall because it was not heavy enough to hold thedenser backfill in place. Colorado recommended a density specification, which weadopted. However, we enforced the specification by occasionally removing a completedgabion and weighing it. This is a somewhat difficult test to administer. We now allowbasket filling from a container (truck) to be weighed before and after. We also recommend drastically reducing the number of these tests if satisfactory results are routineand as the inspector develops a "feel" for what a properly filled and compacted gabionlooks like. Both states also strongly recommended angular stone in a retaining structure for better load transfer. This is now a part of our specification. It was, of course,recognized that this would not be necessary in a non-load-carrying structure such asbank protection. We also evolved a load test geared toward the conditions most likelyto be encountered in a retaining structure. The initial specification was as follows:A section of gabions with units having a minimum dimension of 3 feet and at least four unitslong shall be constructed and filled in the normal manner on a level platform having a removable center section at least 6 feet in length. The gabions shall be so situated that an end-toend connection between units will be situated approximately over the center of the removablesection. This section shall then be removed, leaving a clear span of the gabions of at least 6feet. The gabions, including connection, shall show no sign of failure.While the gabions are in the above condition, a single mesh wire at the bottom and near thecenter of the clear span will be cut, and the gabion units must still exhibit no sign of failure.This was about the time the American Gabion people consented to try the load test.Figure 16 shows that their gabions performed beautifully. They later consented toperform a more stringent test to approximate a several-tiered wall; this test producedvery good results.A problem in one of our earlier contracts arose because we failed to specify the numberof ties to be used to hold the various components together. It was decided at that timethat the ties should equal the strength of the mesh; it has since been decided that this isoverly conservative, inasmuch as load tests have shown that the units will hold up withmost of the wires cut. The amount of mesh is, after all, more a function of the size ofopening necessary to contain the filler. Our latest specification is as follows:Gabion baskets shall be securely fastened to all adjacent gabion baskets to the satisfaction ofthe engineer. It is not intended that the fastenings to adjacent gabions equal the strength ofthe baskets themselves.

103We learned on one of our first retaining wall jobs that our design density of -115 pcf wasdifficult to obtain with the following usual open gradation.SievePercentage Passing8-in, square6-in, square4-in, square10075 -10We therefore specified additional fines to increase density.SievePercentage Passing8-in, square6-in, square4-in, square'/4 -in. square10070 to 805 to 20This has not resulted in any appreciable loss of material and has helped to attain neededdesign density. If a conflict develops between unit weight and gradation in a retainingwall project, the unit weight must always prevail, as long as the filler remains granularand porous. However, we are now designing walls from 105 to 110 pcf, which is not toodifficult to attain.As noted earlier, we have not required hand placing of any filler material. We have hadsome trouble with misshapen gabions because of this, but it can be controlled withproper care, particularly if design density is not too hard to reach. We feel that theneater appearance possible with hand placing is not worth the extra cost. There certainly could be some exceptions to this, particularly in areas requiring more attentionto aesthetics. Regarding aesthetics, we have found gabion structures more desirablethan their concrete counterparts in areas of rugged terrain and high natural beauty,such as forest and mountain settings. In general, we will choose this type of structureover a less expensive design that does not blend so well into the natural terrain (Fig. 17).Most recently, a project was completed for numerous rockfall barriers along Wash- 12at White Pass by using a novel gabion fabrication method developed by a mesh supplier.Essentially, it consists of fabricating the gabions in place from rolls of fence wire byusing common intermediate diaphragms and specially developed stainless steel clips(Figs. 18, 19, and 20). The tedious task of installing tie wires is eliminated by increasing the number of diaphragms and adding additional diaphragms at the wall ends. Thereis a considerable saving on both materials and labor when this method is used, and itmay help to bring gabion costs back in line with riprap and bin walls. We are stillevaluating this method and intend to modify our specifications to allow this type of construction.1Our most ambitious design has been for the 1-90 crossing of Snoqualmie Pass in theCascades. It has been difficult to fit a six-lane freeway into rugged terrain with minimum damage to the environment. The highway will make use of about 55,000 cubicyards of gabions, mostly retaining walls. Fignre 21 shows one talus area wherethreelanes will be supported by a two-tiered wall (Fig. 22). This is also an area of heavysnowfall and frequent avalanches. Although other measures have been used to minimize avalanche hazard, forces due to avalanches had to be considered in the design.1Possiblerevised specifications were included in the original manuscript of this paper. They are available in Xeroxform at cost of reproduction and handling from the Transportation Research Board. When ordering, refer toXS-50, TRB Special Report 148.

105Another unique use of gabions in this area will be as an avalanche deflector. Figure 23shows an avalanche chute that splits above the highway, sending debris in two directions.The left leg is bridged to allow the avalanche to pass safely under the highway. A deflection wall will be constructed at the division point to contain the avalanche in thisleft chute (Fig. 24). This wall, of course, is designed to withstand considerable avalanche forces.In summary, we feel that gabions do, indeed, have a place in highway construction, particularly in areas where natural-appearing structures are desirable. It appears that,with the development of newer methods and with more familiarity by the contractingfraternity, the cost of this type of construction will be competitive with other, more conventional designs.ACKNOWLEDGMENTThis report was written with considerable assistance from the Washington Departmentof Highways. Almost all the material has been gathered over the past 5 years in theauthor's normal duties with the department. Also, much has been drawn from the experiences and recommendations of fellow employees. Considerable advice and assistance were given by personnel of the Idaho and Colorado highway departments andfrom Maccaferri Gabions of America, American Gabions, and Keystone Steel and Wire.This help has been much appreciated.The views and conclusions expressed in the report are strictly the author's and do notnecessarily reflect the position of the Washington Department of Highways.

retaining wall, and rockfall protection. Examples of each of these uses are given. Also presented is the development of Washington specifications for gabion use, and possible future modifications are discussed. Planned gabion use on 1-90 at Snoqualmie Pass is discussed. sA gabion, simply def