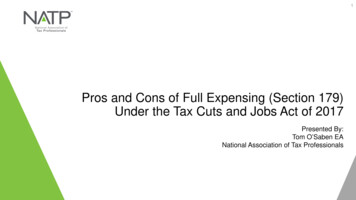 1Pros and Cons of Full Expensing (Section 179)Under the Tax Cuts and Jobs Act of 2017Presented By:Tom O’Saben EANational Association of Tax Professionals

5Other Limits? Taxable Income of the ‘Entity’Too much eligible propertyplaced into service?Can Code §179 create a loss?

6Tax Cuts and Jobs Act of 2017 The Code §179 dollar limitation is increased to 1 million and theinvestment is increased to 2.5 million for tax years after 2017. The definition of qualified real property eligible for expensing is redefinedto include improvements to the interior of any nonresidential real property.

8Qualified Improvement Property An improvement to an interior portion of a nonresidential realproperty that is placed into service after the date the building wasfirst placed into service.This Includes: RoofsHeatingVentilationA/C PropertyFire protection and Alarm SystemsSecurity Systems

9Code §179 and Like Kind Exchanges For tax years after 2017, likekind exchanges are limited toreal estate only.So the question becomes whathappens when we exchangeone business asset for anotherafter 2017?Answer:Claim the proceeds allowedon the old as income and startover with depreciation on thefull cost of the new asset.

12Code §179 and Like Kind Exchanges What about the new truck? Start depreciation at 60,000 if eligible, can elect Code §179 on full 60,000 orbonus or regular depreciation whichever suits the client situation best.

14Code §179 Recapture When does that happen and howdoes it happen? If during the normal depreciable lifeof a qualified Code §179 asset thebusiness use drops to less than 50%then the difference betweendepreciation allowed or allowableand the amount of Code §179claimed is added back to incomefrom whence the deduction came.?

17Mr. “I’m Not Doing That Business Any Longer” Client started a business in 2017will full intent that this was going tobe the million dollar idea.Client wrote off (Code §179) all ofthe equipment, a truck, etc., againstother income on the tax return.Comes to see you this year. Youask about the million dollar idea andhe tells you, “Yeah, I’m not doingthat anymore.”

19Making the Decision To maximize Code §179 in avacuum without consideration forother impacts on the taxpayer suchas a reduction in QBI be a mistake?We decide to write off 100% of anasset under Code §179 yet is thereal income tax result 80% of thatamount (or less) because of theQBI—but when the asset is sold100% of the proceeds are taxable?

20Unreimbursed Employee Expenses and Code §179 in theaftermath of the Tax Cuts and Jobs Act For tax years after 2017,unreimbursed employee businessexpenses are no longer allowed. Many employees have businessrelated assets that are beingdepreciated over time.

21Unreimbursed Employee Expenses and Code §179 in theaftermath of the Tax Cuts and Jobs Act World What do we do for those employees with assets being depreciated? Rev Proc 2008-54 allows Code §179 to be elected in or elected out for open years.Consider going back to 2015-2016-2017 returns and electing Code §179 for assetsplaced into service during those years and Code §179 was not elected originally.For other assets could de minimis safe harbors now in effect be utilized?

Thank you!Stop by the NATP booth in the Expo Hall to talk more about this topic,to get your badge scanned so we can send you more materials and tolearn about the support and benefits you receive when you’re a memberof the National Association of Tax Professionals.

Tax Cuts and Jobs Act of 2017 6 The Code §179 dollar limitation is increased to 1 million and the investment is increased to 2.5 million for tax years after 2017. The definition of qualified real property eligible for expensing is redefined to include improvem

REDSHIFT VS TERADATA AN IN-DEPTH COMPARISON