Expansion And Reform: Technology Of The 1800s 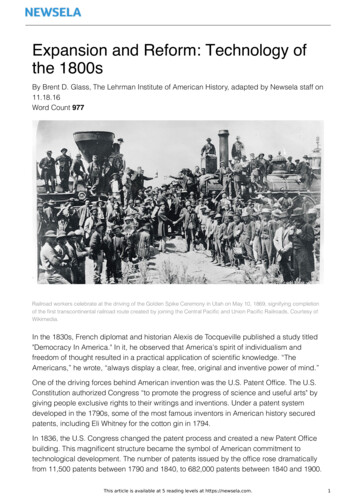 Expansion and Reform: Technology ofthe 1800sBy Brent D. Glass, The Lehrman Institute of American History, adapted by Newsela staff on11.18.16Word Count 977Railroad workers celebrate at the driving of the Golden Spike Ceremony in Utah on May 10, 1869, signifying completionof the ﬁrst transcontinental railroad route created by joining the Central Paciﬁc and Union Paciﬁc Railroads, Courtesy ofWikimedia.In the 1830s, French diplomat and historian Alexis de Tocqueville published a study titled"Democracy In America." In it, he observed that America's spirit of individualism andfreedom of thought resulted in a practical application of scientiﬁc knowledge. “TheAmericans,” he wrote, “always display a clear, free, original and inventive power of mind.”One of the driving forces behind American invention was the U.S. Patent Ofﬁce. The U.S.Constitution authorized Congress “to promote the progress of science and useful arts" bygiving people exclusive rights to their writings and inventions. Under a patent systemdeveloped in the 1790s, some of the most famous inventors in American history securedpatents, including Eli Whitney for the cotton gin in 1794.In 1836, the U.S. Congress changed the patent process and created a new Patent Ofﬁcebuilding. This magniﬁcent structure became the symbol of American commitment totechnological development. The number of patents issued by the ofﬁce rose dramaticallyfrom 11,500 patents between 1790 and 1840, to 682,000 patents between 1840 and 1900.This article is available at 5 reading levels at https://newsela.com.1

Fuel of interest adds to the fire of genius“The patent system added the fuel of interest to the ﬁre of genius,” said Abraham Lincoln,himself a recipient of a patent for a device to raise steamboats over sandbars.The other major inﬂuence that drove America’s technological development was theexpansion of the nation’s boundaries, population and economy. The territorial size of theUnited States quadrupled from 1800 to 1900 as it spanned the continent from the Atlanticto the Paciﬁc. The population grew from 5.3 million people in 1800 to 75 million in 1900.The need to connect and supply this expansive nation encouraged breakthroughs intransportation, communication and manufacturing.The main technology of the 19th century was steam power. Steam engines provided amore reliable and effective source of power than water or wind. American cities becamecenters of steam-powered manufacturing.The most signiﬁcant breakthrough in the Age of Steam was the development of railroads.The building of the ﬁrst American railroad, the Baltimore and Ohio, began on July 4, 1828.The ﬁrst 13 miles of rails were ready for a trial run in 1830. By 1900, the number of trackmiles had grown to almost 200,000, 40 percent of the world’s total.First transcontinental rail linkThe railroads symbolized America’s technological ambitions, and the completion of the ﬁrsttranscontinental rail link in 1869 was one of the deﬁning moments in the history of thenation — an impressive feat of engineering, ﬁnance and labor.Technological advances changed nearly every aspect of life in the 19th century. Newagricultural technology allowed farmers to greatly improve their harvests. Steelmanufacturing also became an important new industry.One immediate impact of the improvement in the quality of steel occurred in bridgebuilding technology. The best-known and most successful bridge designer during this timewas John A. Roebling, a German immigrant. Roebling’s creative use of wire ropetechnology resulted in spectacular suspension bridges. His daring structures, includingthe Brooklyn Bridge, were both functional and beautiful.Inventors are celebrated figuresThe full implications of some technological advances were not evident for many years oreven decades. In August 1859, for example, Edwin Drake created the world’s ﬁrst oil wellnear Titusville, Pennsylvania, using drilling technology he observed in local salt mines. By1900, Pennsylvania produced half of the world’s oil supply and there was drilling activity in13 other states. However, the uses of oil were limited in the 19th century mostly toThis article is available at 5 reading levels at https://newsela.com.2

illumination and medical products such as petroleum jelly. Reﬁning oil as a fuel andlubricant for cars, ships and locomotives and using oil as a base for plastic and otherproducts would take place in the 20th century.The 19th century was also a time when inventors became celebrated as central ﬁgures inthe spectacular growth of technology. Samuel Morse’s invention of the telegraph (1835)and Alexander Graham Bell’s telephone (1876) made long-distance communicationpossible in a rapidly expanding nation. In 1846, Elias Howe patented the sewing machine,followed by Isaac Singer’s improved version in 1851. The names of these inventors andothers were inextricably linked with their products.Thomas A. Edison was without question the most prominent ﬁgure among thisextraordinary group of American inventors. In his lifetime, he amassed more than 1,300patents including the electric voting machine (1869); the phonograph (1878); theincandescent lamp (1879); movie ﬁlm and the motion picture camera (1889 and 1891);and the radio (1891). He constructed the world’s ﬁrst central electrical power plant andassembled the world’s ﬁrst industrial research laboratory.Technological achievementsThe application of technology achievements drew upon the entrepreneurial skills of a risingbusiness class. Andrew Carnegie, for example, was able to turn the breakthroughs in steelproduction into a formidable manufacturing corporation. John D. Rockefeller securedcontrol of the production, reﬁning, transportation and distribution of oil through hisStandard Oil Trust. At the end of the century, Henry Ford established a company tomanufacture automobiles on a scale never before seen.The enormous scope of these corporate operations resulted in extraordinary wealth forAmerica’s leaders of industry, ﬁnance and business. The marriage of technology andbusiness also offered great opportunities for millions of American workers. However, thestruggle for wages and a safe workplace led to a series of conﬂicts between labor andmanagement that erupted in nearly every major industry. At the same time, governmentregulation over industry and business became necessary to ensure fair competition and toprotect consumers.Just as the technology of the 19th century responded to the social and economic needs ofa new and expanding nation, so too did the uses and consequences of technology extendinto every aspect of life as America entered the 20th century.Brent D. Glass recently retired from the Smithsonian after nine years as director of theNational Museum of American History in Washington, D.C.This article is available at 5 reading levels at https://newsela.com.3

Quiz12Which of the following selections from the article BEST develops the article's central idea?(A)The best-known and most successful bridge designer during this time wasJohn A. Roebling, a German immigrant. Roebling’s creative use of wire ropetechnology resulted in spectacular suspension bridges.(B)However, the uses of oil were limited in the 19th century mostly toillumination and medical products such as petroleum jelly. Reﬁning oil as afuel and lubricant for cars, ships and locomotives and using oil as a base forplastic and other products would take place in the 20th century.(C)The 19th century was also a time when inventors became celebrated ascentral ﬁgures in the spectacular growth of technology. Samuel Morse’sinvention of the telegraph (1835) and Alexander Graham Bell’s telephone(1876) made long-distance communication possible in a rapidly expandingnation.(D)However, the struggle for wages and a safe workplace led to a series ofconﬂicts between labor and management that erupted in nearly every majorindustry. At the same time, government regulation over industry andbusiness became necessary to ensure fair competition and to protectconsumers.Read the sentence from the section "Technological achievements."Andrew Carnegie, for example, was able to turn the breakthroughs insteel production into a formidable manufacturing corporation.Does this sentence support a main idea of the article? Why or why not?(A)Yes, it explains how technological breakthroughs led to powerful andinﬂuential businesses.(B)Yes, it illustrates one way in which the inventions of the 19th century led towealth for everyone.(C)No, it is a minor detail that does not describe an innovation of the 19thcentury.(D)No, it does not speak to the importance of the inventors of the newtechnologies.This article is available at 5 reading levels at https://newsela.com.4

34How does the article develop the idea of the railroads' importance in 19th-century UnitedStates?(A)by describing the labor that was involved in the completion of thetranscontinental rail link(B)by giving the date of the ﬁrst American railroad and explaining that it had 13miles of track(C)by explaining that railroads would not have been possible without theinvention of steam power(D)by describing how the railroads grew quickly and demonstrated the nation'stechnological strengthAccording to the article, each of the following contributed to the innovation boom of the 19thcentury EXCEPT:(A)the 1836 change in the U.S. patent process(B)the expansion of America's economy during the 19th century(C)the publishing of Alexis de Tocqueville's "Democracy in America"(D)the growth in America's population and its spread across the continentThis article is available at 5 reading levels at https://newsela.com.5

The railroads symbolized America’s technological ambitions, and the completion of the ﬁrst transcontinental rail link in 1869 was one of the deﬁning moments in the history of the nation — an impressive feat of engineering, ﬁnance and labor. Technological advances cha

Reform of Hazardous Substances Management under the