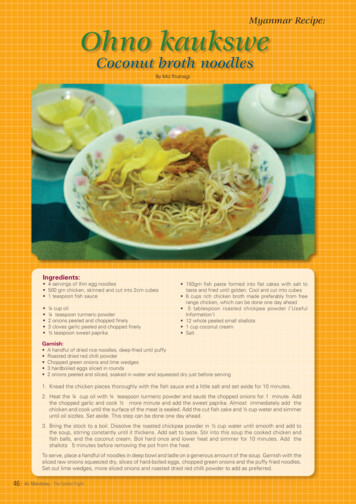 MyanmarF olkt aleThe wonderful cock(From Maung Htin Aung’s “Burmese Folktales”)Once there were two brothers.One brother, who was poor, livedin the forest, while the otherbrother, who was rich, lived in the town.One day the poor brother found a goldenfeather underneath a tree and, on lookingup, saw a cock sitting on a branch. Hepicked up the feather and took it to hisrich brother. ‘It is a pretty thing,’ said therich brother, ‘but of little value. I will giveyou a silver coin for it.’ The poor brotherhad never handled gold, and did not knowthat the feather was of the purest gold.So he thought that a silver coin was agood price for a feather. The next day thepoor brother again went to the tree, and48 Air Mandalay - The Golden Flightagain found a golden. feather, which wasalso sold to the rich brother for a silvercoin. This went on for many days.One day, as the poor brother stoopeddown to pick up the golden feather, thecock crowed out repeatedly: ‘If anyoneeats my heart, he will find two goldeneggs every morning under his pillow.’ Thepoor brother told the rich brother aboutthis and the rich brother said: ‘If you canbring me the dead body of the cock, I willgive you one thousand silver coins.’ ‘I donot want your silver coins,’ replied thepoor brother, ‘but I want you to adopt mytwo boys as your sons, for I want them

MyanmarFolktaleto grow rich like you.’ When the rich brother promised to adoptthem, the poor brother in his turn promised to send him the cockthe next day.Early next morning, he went to the tree and shot the cock withhis bow and arrow. Then he sent his two sons with the cockto the rich brother. The rich brother, being a miserly old fellow,had no intention of giving his nephews board and lodging fornothing, and decided to use them as his servants. So he orderedthe boys to cook the cock for his dinner. The boys, who wantedto please their uncle very much, cooked it with skill and care, butthe heart of the cock jumped out of the pot. ‘Oh, dear,’ said theelder brother, ‘we will have to throw it away: we cannot serve itto our uncle, because it has fallen on the dirty kitchen floor.’ ‘Donot throw it away,’ said the younger brother.”, ‘I am feeling sohungry. Let us halve it and eat it.” So thc two boys together ateup the heart. When the uncle sat down to dinner, he looked inthe dish for the cock’s heart, but could not find it. When hc learnton inquiry that the two boys had eaten it, he felt so disappointedand angry that he drove them out of his house with blows. Thetwo boys went back to their home in tears.The next day each found a golden egg under his pillow, becauseeach had eaten one half of the cock’s heart. The boys took theeggs to their father who was so angry against the rich brotherthat he not take the eggs to him, but sold them to a stranger.The stranger, being an honest merchant, gave a good price forthe eggs, and only then did the poor brother realize that the richbrother had been cheating him all along over the golden feathers.The poor brother and his two sons daily sold two golden eggs,and became far richer than the rich brother.’Air Mandalay - The Golden Flight 49

Air Mandalay DestinationsYangonThe commercial centre of Myanmar, Yangon still maintains its colonial charmand features wide, tree-lined avenues, tranquil lakes and gracious turn-of-thecentury architecture. The magnificent Shwedagon Pagoda dominates the cityskyline, while at street-level Yangon is a paradise for those wanting to hunt outexotic arts and crafts. Of particular interest are the many shops in BogyokeMarket and its many jewellery stores are famous for their rubies, sapphiresand jade. At night, the Chinatown district comes alive with its street bazaarsand night stalls selling snacks and fresh food.See and Do:oda, the 99-metre* Wander around Shwedagon Pagen at nightstall (330 foot) stupa that glow goldier outletprem’scitytheket,Mar* Shop in Bogyokefor precious gems and jewelleryMandalayImmortalised by Rudyard Kipling, Mandalay was established in1857 in accordance with an ancient Buddhist prophecy. It wasthe final capital of Myanmar’s Konbaung Dynasty before thecountry was annexed by the British. The city takes its name fromMandalay Hill and is centred around the walls and moat of theold palace, which was destroyed in the fighting of World War IIbut was rebuilt in the 1990s. Mandalay is considered a centre ofBuddhism in Myanmar and is also home to many of the country’scraft industries.See and Do:* Walk up Mandalay Hill, where more than 2000years ago the Buddh a reputed ly prophes ied theestablishment of the modern city* Cross the Ayeyarwady River to Mingun, home to agiant unfinished pagodaBaganOne of the most remarkable archaeological sights in Asia – if not theworld – the magic of Bagan has brought visitors to Myanmar for nearly1000 years. Once the centre of a glorious kingdom, Bagan sits on a dustyplain and thousands of ancient temples dot the landscape as far as theeye can see. Today, apart from spectacular sunset views and serene rivercruises, Bagan is also the centre of Myanmar ‘s lacquerware industry.See and Do:sands of ancient* Take a pony cart around the thoutemples that dot the Bagan plaind”, the cent re of* Eat out on “Re stau ran t Roaareanightlife in the50 Air Mandalay - The Golden Flight

feather underneath a tree and, on looking up, saw a cock sitting on a branch. He picked up the feather and took it to his rich brother. ‘It is a pretty thing,’ said the rich brother, ‘but of little value. I will give you a silver coin for it.’ The poor brother had never handled gold, and did not know

Lost in Translation: Feminism in Myanmar

Christian–Buddhist Dialogue in Myanmar: A Spirituality of .

Social Sector Development in Myanmar: The Role of the State