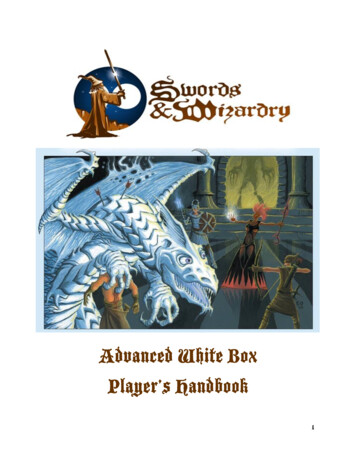 ForewordMy introduction to Tabletop-RPGs was through the medieval toy and castle sets namedImaginext and Playmobil. I had the instinct of rolling to see which knight would win in thebattle, kindling my fire for tabletop roleplaying. In 8th grade, I bought the vintage 80s boardgame Heroquest and loved it immensely. I created homebrew rules, classes, and quests for it,expanding it to the point to where it was more a tabletop roleplaying game than a hack and slashboard game. So I set out and bought the then new D&D 4th edition quick start set. The ruleswere over complicated for my friends and my attention span, so we made our own. We took outmany of the rigorous combat rules in favor for a richer roleplaying experience. In early highschool, I tried Pathfinder and 3.5 edition. I had a feeling that it wouldn't feel like the retrodungeon crawling of Heroquest, but I had no idea that it'd feel more like filing taxes thanactually playing a roleplaying game. It wasn't until an anon on the /tg/ (traditional gaming) boardsuggested Swords & Wizardry: Whitebox, and said that you'll never go back. I tried it. Theycouldn't have been further than the truth. It was free, it was fun. It felt like the homebrew fun ofmy youth, yet adaptable for my more matured and aged roleplaying needs.Swords & Wizardry: Advanced Whitebox Player's Handbook has gone through manyedits, and will continue to go through many more. While I did work on some classes and rules onmy own, many aspects have been ripped directly and shamelessly from other sources. Fromblogs, to supplements, to other computer games, to other editions, this book is more of acompilation of my favorite homebrew rules and I mostly take credit for compiling them togetherin one book. The name Advanced Swords & Wizardry is more so to distinguish between theoriginal game and my house rules for it takes attributes from a plethora of other systems andsources. OD&D is known for its harshness and unapologetic nature. You may not survive. But ifyou do, the fruits of your labor are ever so sweeter. Races work as classes because they are rarein a predominantly human and evolving world, leaving ancient magic and lore behind slowly butsurely. This philosophy is directly inspired from Gary Gygax's philosophies in creating theoriginal game. It was almost discouraged to play as another race due to level caps, formatting amore human-centric game.The DM has the right to modify any rules. In fact, there are gaps in the rules specificallyfor the DM to add their own flare and make it their own setting. When in doubt, make a ruling.This book is a great resource for players as well as the Dungeon Master. For monsters, spells,and magical items, refer to the white box. You are a hero, not super hero. OD&D is very muchbased on a human scale. It is incredibly normal for players to feel small from the start. It's wherethe popular saying "Don‘t split the party" comes from. If the original Whitebox only had 3classes and 3 races, one may ask, why are there so many more options in this book? I lovevariety and options. No two party should be the same. I encourage experimentation as a DM.After all, above balance, the game is about having fun with friends, crawling dungeons.4

Character CreationThe original version of the S&W: Whitebox was based on the OD&D (OriginalDungeons & Dragons) Whitebox rules. It is incredibly streamlined, easy to pick up, andadaptable to the Dungeon Master's discretion. This Advanced edition of S&W: Whitebox adaptsthe accessibility of the Whitebox set of rules, while adding complexities for more experiencedplayers. Remember that the Dungeon Master may change any aspect of the rules to their liking.S&W: Whitebox originally featured only six playable classes: Fighter, Magic-User(Wizard), Cleric, Halfling, Dwarf, and Elf. When a character hits 0 hit points, they are dead.There are no stress levels, difficulty checks are more or less determined by the Dungeon Master,attribute bonuses ended with 1, and rolling stats were 3d6 in descending order. Play these rulesfor a more retro experience. Refer to Quick Primer to Old School Gaming for the true retro feel.Nothing in this rulebook is concrete! Dungeon Masters may use or deny any aspect of the rulespresented here as they see fit, or even add new rules.Character SheetsA character sheet is a piece of paper designed to organize and contain any and allnecessary PC information, for the benefit of both the Dungeon Master and Player. For AdvancedSwords and Wizardry: Whitebox, the character sheet could be something as simple as a 3 5‖index card—with equipment and spells written on the back, like so:6

Attribute DescriptionsStrength: Physical power for lifting, hurling, cutting, and dragging. Characters with Strength of 5or less can carry a weapon or a shield, but not both. When performing tasks of hard labor, playercharacters typically add their strength modifier to said roll per the Dungeon Master‘s discretion.Intelligence: Intelligence represents IQ, reasoning, and the ability to solve puzzles or understanddifficult concepts. A high Intelligence score gives a character an additional language for every 2points above 10.Wisdom: Wisdom determines a character‘s insight, perception, sanity, stress management, andgood judgment. A character‘s stress score is equal to their Wisdom score. Any character with ahigh Wisdom score (15 ) gets a 5% bonus to XPConstitution: Constitution refers to the health and endurance of a character. A high Constitutionscore (15 ) gives 1 hitpoint for each hitdie, while a weak Constitution (6-) gives a penalty -1for each hitdie.Dexterity: Dexterity is a combination of coordination, nimbleness, and quickness. A highDexterity (15 ) will add 1 to a character‘s Armor Class while a low Dexterity (8-) gives apenalty of -1 to Armor Class.Charisma: Charisma refers to a character‘s force of personality, persuasiveness, personalmagnetism, ability to lead, and physical attractiveness.A PC with a high Charisma (15 ) maystart a character with a torchbearer hireling.Attribute ScoresThe basic abilities are numbers which represent the Strength, Intelligence, Wisdom,Constitution, Dexterity, and Charisma of a character. The standard way to create attribute scoresis to roll 3d6 for each attribute in descending order. Once those rolls have been made, it isobvious which type of character best fits the statistics—though, the player always has the optionto play any class desired.Attribute RollDescriptionBonus3-6Below Average-17-14Average015-18Above Average 1House Rules: Heroes of LegendFor campaigns in which the PCs are superhero in nature, players have a choice between rolling4d6 for each ability in descending order and dropping the lowest number, or rolling 3d6 andchoosing which ability to attribute the roll to. Note that rolls may not be saved for later and mustgo somewhere before a new roll is made.7

Hit PointsHit points (HP) represent the amount of ―damage‖ a character can take before dying andare determined by the amount of hit dice (HD) a character has at their particular class level. If aPlayer begins the game with a 1st level Fighter, (1 1 HD) they would therefore roll 1 HD (1d6)and add ― 1‖ to the end result to determine their PC‘s starting HP.Hit points are re-rolled each time a Player Character advances in level—however, if there-roll results in a character having fewer hit points for their new level than their previous level,ignore the re-roll and retain the prior amount.House Rule: Heroes of LegendFor campaigns in which the PCs are superhero in nature, Player Characters at Level 1 may startat max HD. (For example, if a 1st level Fighter's starting HD are 1d6 1, then their starting HP is7.)Social Class & Starting GoldA Player Character's social class not only affects their starting gold total, but it affectstheir character's view on life. To generate character social class and starting gold, the PC rolls3d6 x 10, and then rolls 1d6 and consults the chart below.RollSocial Class1PC comes from laboring background (farmer, carpenter, etc.) [-1 to each die]2PC comes from common background/middle class [Face value 3d6x10 roll]3PC comes from artisan/mercantile background [ 1 to one die rolled]4PC comes from lower noble background [ 1 to two dice rolled]5PC comes from upper artisan background [ 1 to each die rolled]6PC comes from lesser royal background [ 2 to each die rolled]8

Character FlawsNo matter how heroic someone is, no one is perfect. The world‘s heroes all have theirown demons. During character creation, each player character must roll for a random characterflaw. It‘s a great opportunity for role playing. Through their journeys, players may learn toovercome their inner struggles, or potentially make them worse.Character Flaws Chart1.Random Player‘sChoice2. Alcoholic3. Greedy4. Pacifist5. Compulsive LiarFlaws6. Religious Radical11. HopelessRomantic7. Control Freak12. Fearless8. Claustrophobic13. Sexist9. Bloodthirsty14. Racist10. Coward15. Gambler16. SelfCentered/Selfish17. Timid/Anxious18. Unquiet Mind19. Brutally Honest20. SaintlyAlignmentIf you‘re playing a game and want an ―unofficial‖ default, then the players may chooseone of three alignments: Law, Chaos, or Neutrality. The good guys are Lawful, the bad guys areChaotic, and anyone just trying to achieve fame, fortune, and balance is Neutral. Some DungeonMasters may employ a more dynamic alignment system, such as Lawful Evil, Chaotic Good,etc., as a ranking of more complex levels of morality.9

Calculating Armor ClassFor the ascending system, an unarmored person has an AC of [10]. A character‘s armoradds to their AC, so the higher one‘s AC, the harder it is for enemies to hit them. To calculate anArmor Class, look at the Armor table on the Items and Equipment page, in the Effect on ACcolumn. For the type of armor the character bought, add the number shown in brackets to theirbase AC of [10]. That‘s the player character‘s new Armor Class.HenchmenThe world is harsh and unforgiving. Many characters, particularly when first starting anadventuring career, are in need of hirelings to assist in carrying loot or fighting monsters.Characters are free to create advertisements and inquire at local establishments to find availablehirelings. A player‘s Charisma score affects how many henchmen a player can lead, and howloyal the henchmen are. Good treatment, respect, and a fair share of treasure earned shouldgarner bonuses to loyalty checks, while abuse, physical or otherwise, will bring about penalties,abandonment, or worse. NPCs should be treated as distinct individuals, and not mere extensionsof the Player Character. Motivation detection spells may alert players of selfish-mindedhenchmen. If a henchman dies and has a family, it is in good courtesy to compensate theirfamilies.Charisma BonusCharisma3-45-67-89-1213-1516-1718Hirelings (Max #)1234567Loyalty Bonus-2-2-10 1 2 2MoraleCertain monsters, such as mindless or undead creatures, are fearless and will always fightto the death. The majority, however, will not continue to fight a hopeless battle and will seek toretreat, surrender, or flee. The Dungeon Master will decide when monsters abandon battle andretreat, based upon the situation and the monster‘s intelligence. Dungeon Masters should also usemorale to determine the actions and loyalty of henchmen or other companion NPCs. If there isuncertainty about the morale of NPC‘s or monsters, the following table can be used at theDungeon Master‘s discretion.10

Morale Check TableRoll2 or less3-56-89-1112MoraleSurrenderFleeHoldFight for AdvantageAttack!CombatWhen the party of adventurers comes into contact with enemies, the order of events in thecombat round is as follows:1) The Dungeo

Swords & Wizardry: Advanced Whitebox Player's Handbook has gone through many edits, and will continue to go through many more. While I did work on some classes and rules on my own, many aspects have been ripped directly and shamelessly from other sources. From blogs, to supplements, to other computer games, to other editions, this book is more of a compilation of my favorite homebrew

Introduction to Computer Science with MakeCode for Minecraft