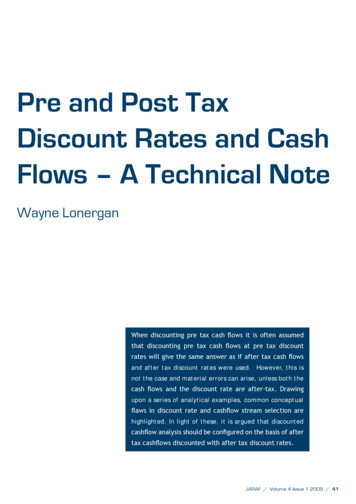 THE JOURNAL OF APPLIED RESEARCH IN ACCOUNTING AND FINANCE1. IntroductionThis article examines the issues associated with the use of preand post tax discount rates in the conduct of analytical procedures in which cashflow discounting is necessary. In particular,the paper addresses the matter of problems which arise wheninappropriate assumptions are made in relation to the estimation and application of pre tax discount rates.When discounting pre tax cash flows it is often assumed thatdiscounting pre tax cash flows at pre tax discount rates willgive the same answer as if after tax cash flows and after taxdiscount rates were used. However, this is not the case andmaterial errors can arise, unless both the cash flows and thediscount rate are after-tax.For the reasons outlined below, the preferred (and technicallycorrect) method to discount cash flows is to express cash flowsforecasts on an after tax basis, and to discount those cashflows using an after tax discount rate.The article is structured as follows. Section 2 discusses issues relating to the need for consistency in the selection ofdiscount rates to be applied to streams of cashflows. Section3 discusses problems associated with the calculation of pretax cashflows, while Section 4 highlights the problems inherent with the estimation of pre tax discount rates. Section sixincludes a series of analytical examples which clearly demonstrate the errors which can arise in valuations where the conceptual errors outlined in sections 2, 3 and 4 are not avoided.Some brief conclusions are offered in Section 6.2. Consistency between cash flows anddiscount rateTo ensure consistency between the cash flows and the discountrate used, the cash flows and the discount rate should beexpressed on a consistent basis. That is, after tax cash flowsmust be discounted at after tax discount rates. There are anumber of fundamental reasons why this is so:a.rates of return on equity investments are only observableon an after company tax basisb.the capital asset pricing model (CAPM), from which discount rates are derived, is based on stock market returnof shares, which returns are calculated after companytax, andc.as a matter of logic, like should be compared with like.3. Calculating pre-tax cash flowsImplicit in the approach based on discounting pre-tax cashflow at pre-tax discount rate is the proposition that pre-taxcash flow can be obtained by grossing up post-tax cash flowat a rate equal to one less the marginal corporate tax rate,or conversely, post-tax cash flow is simply pre-tax cash flowmultiplied by a factor equal to one less the marginal corporatetax rate.This proposition is not always correct because it ignores thedivergence between pre-tax income, which is used for tax assessment, and pre-tax cash flow. This divergence arises:a.because cash flows may differ significantly from profitsdue, for example, to working capital movements and thetiming of capital equipment purchases, etc42 / JARAF / Volume 4 Issue 1 2009b.due to the difference between the timing of revenue andexpense recognition for accounting purposes and the timewhen cash receipts and cash outgoings actually occur.The accrual accounting model, the basis of accountingadopted in most businesses (other than small, cash-basedbusinesses), focuses on the acquisition and use of economicresources in operations, not on their associated cash flows. Forexample, although council rates may be paid once a year, under accrual accounting one twelfth of the amount is expensedeach month.The divergence between pre-tax income and cash flows andits consequence on the pre-tax approach is exacerbated by anumber of issues, including that:a.depreciation and capital equipment purchases and disposals are not coterminous; andb.the existence of permanent tax differences (PMT) andtemporary timing differences (TTD).The flaw of the pre-tax approach is best understood if debt isassumed to be zero, and PMT and TTD are put aside, for thesake of simplicity and illustration. In which case, the difference between pre-tax income and pre-tax cash flow is mainlyattributable to:a.movements in working capitalb.tax depreciationc.tax losses (if any)d.capital expenditure (and capital receipts).By definition, post-tax cash flow is equal to pre-tax cash flowless tax. Pre-tax income is not always equal to pre-tax cashflow due to the foregoing factors. Therefore, tax payable,which is determined by multiplying the marginal corporate taxrate (e.g. 36 percent) by pre-tax income, is generally different from pre-tax cash flow multiplied by the marginal corporate tax rate.It mathematically follows that multiplying pre-tax cash flowby a factor equal to one less the marginal corporate tax rate isgenerally not equal to post-tax cash flow. This proposition canbe further reinforced by deriving a mathematical relationshipbetween pre-tax cash flow and post-tax cash flow. The derivation is presented below.In this derivation, the following notations are used:CFATCFBTOCORTTDTLTPΔWCCapexPost-tax cash flowPre-tax cash flowOperating cost (excluding depreciation /amortisation)Operating revenueCorporate tax rateTax depreciationTax lossesTax paidChanges in working capitalCapital expenditure

Pre and Post Tax Discount Rates and Cash Flows – A Technical NoteCFBT CFAT TP Substituting (3) into (2) yieldsCFAT Rearranging (1) gives(OR – OC) Substituting (5) into (4) yieldsCFAT CFAT Collecting terms and rearrangingCFAT OR – OC ΔWC – CapexCFBT – TP(OR – OC – TD – TL) x T(1)(2)(3)CFBT – (OR – OC – TD – TL) x T(4)CFBT – ΔWC capex(5)CFBT – (CFBT – ΔWC Capex – TD – TL) x TCFBT – CFBT x T (ΔWC –Capex TD TL) x TgivesCFBT (1 – T) (ΔWC –Capex TD TL) x T(6)(7)Equation (7) sets out a theoretical relationship between pre-tax cash flows (CFBT) and post- tax cash flows (CFAT). It is clear thatCFAT is equal to CFBT (1-T) only if the second term of Equation (7), i.e. (ΔWC – Capex TD TL) x T, is zero. This is generally notthe case because there is no reliable relationship between working capital, capital expenditure, tax depreciation and tax losses.A limited circumstance under which the second term of Equation (7) might be zero is mature profitable businesses where there islikely to be no change in working capital requirement and depreciation is likely to be equal to capital expenditure. This is consistentwith the examples of no growth perpetual cash flow scenarios discussed below.The following numerical example shows that post-tax cash flow is not equal to pre-tax cash flow multiplied by a factor equal to oneless the marginal corporate tax rate:Pre-tax calculationRevenue100,000Less cost50,000Less change in WC10,00020,00020,000Less CapexPre-tax cash flowTaxRevenueLess costLess taxdepreciationLess tax lossesPre-tax incomeTax rateTax paid100,00050,00015,000Post-tax calculationPre-tax cash flow20,00010,500Less tax paidPost-tax cash flow9,500Nil35,00030%10,500Pre-tax cash flow x (1 – 0.30) 14,000* 9,500 post-tax cash flow* Being 20,000 x 0.74. Calculating pre tax discount ratesPre tax discount rates are often (but incorrectly) calculated by grossing up the after tax discount rate by one less the marginalcorporate tax rate. On this basis, an after tax discount rate of 14% per annum, assuming a tax rate of 30%, equals a pre tax discountrate of 20% per annum.However, there are various difficulties in undertaking a pre tax discounted cash flow (DCF) analysis. In summary, the grossing up formula used to derive pre tax discount rates is an over-simplification and only holds under limited circumstances.Firstly, there is no practical reliable method to calculate a pre tax discount rate, and they can not simply be calculated by grossingup the after tax discount rate. Secondly, investors are interested in after tax rather than pre tax returns. Furthermore, the variables used to calculate the cost of equity (including beta and the market risk premium) are based on movements in company stockprices which are based on companies after tax (not pre tax) results.The CAPM variables of the cost of equity and the pricing of company shares are therefore measured on an after tax basis. Thus it issimply not possible to empirically verify pre tax rates of return for equities and similar assets.5. Analytical ExamplesThe following examples show that there are fundamental errors when calculating the present value of cash flows using pre-taxdiscount ratesIn particular, the examples show that adjusting an after tax discount rate to calculate a pre-tax discount rate using the above grossup formula will only lead to the same values being determined on a before and after tax basis when the cash flows are in perpetuitywith no growth.JARAF / Volume 4 Issue 1 2009 / 43

Pre and Post Tax Discount Rates and Cash Flows – A Technical NoteA similar pattern may be observed when contemplating multi period cashflows. The following example shows a five year cash flow,discounted using pre tax cash flows and discounts rates, and after tax cash flows and discount rates.Example 4 – Multi Period CashflowsPre tax calculations:Year12345Total valuePost tax calculations:Year12345Total valuePre taxCash flow 20,00025,00030,00035,00040,000PV factorat 20% pa1.201.441.7282.07362.4883Present value 16,66717,36117,36116,87916,07584,343Post taxCash flow 14,00017,50021,50024,50028,000PV factorat 12.8% pa1.1141.29961.48151.68901.9254Present value 12,28113,46614,17414,50614,54268,969Again, the pre and post tax present values are materially different, if the naïve grossed up pre-tax discount rate is applied.6. ConclusionThis article has argued that there are fundamental errors in calculating the present value of cash flows using pre-tax cash flows anddiscount rates. There are only a few special cases where this approach may give the same answer as discounting after tax cash flowsat after tax discount rate, for instance the case of cash flows in perpetuity with no growth. A series of analytical examples set out insection 5 clearly demonstrate this. Consequently, it is important that after tax cash flows and after tax discount rates are applied inDCF valuations. JARAFWayne Lonergan is Managing Director of Lonergan Edwards andAssociates Limited. He has specialised in valuations, consequentialloss assessments and litigation support work for 35 years.Wayne is an Adjunct Professor at the University of Sydney and hasheld numerous statutory and professional appointments includingmemberships, over many years, of the Companies and SecuritiesAdvisory Committee, Australian Accounting Standards Board andInternational Accounting Standards Subcommittees on FinancialInstruments. He has also held numerous and senior roles in theSecurities Institute of Australia, including three years as NationalPresident and Chairman of several subcommittees on capital marketrelated matters. He is presently a member of the InternationalFinancial Reporting Interpretations Committee of the InternationalAccounting Standards Board.Wayne Lonergan is widely acknowledged as the leading Australianexpert in the area of corporate and business valuations.JARAF / Volume 4 Issue 1 2009 / 45

Why Discount Rates Should Reflect Liabilities: Best Practices for .

The Discount Rate and Market Interest Rates: What's the Connection?

Farmers and Use Tax - South Dakota Department of Revenue