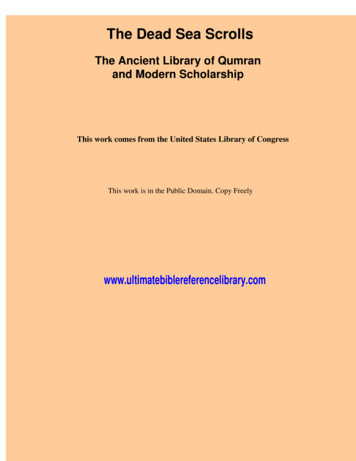 Scrolls From the Dead Sea:The Ancient Library of Qumran and Modern ScholarshipABOUT THIS EXHIBITThe exhibition Scrolls From the Dead Sea: The Ancient Library of Qumran and ModernScholarship brings before the American people a selection from the scrolls which have been the subjectof intense public interest. Over the years questions have been raised about the scrolls' authenticity, aboutthe people who hid them away the the period in which they lived, about the secrets the scrolls mightreveal, and about the intentions of the scrolls' custodians in restricting access. The Library's exhibitiondescribes the historical context of the scrolls and the Qumran community from whence they may haveoriginated; it also relates the story of their discovery 2,000 years later. In addition, the exhibitionencourages a better understanding of the challenges and complexities connected with scroll research.The goals of the "Scrolls from the Dead Sea" exhibition are three fold: to enable visitors to see twelve ofthe Dead Sea Scroll fragments; to promote greater understanding of the turbulent period in which theDead Sea Scrolls were copied; and to provide some insight into the questions raised and the "mystery"surrounding this great manuscript find.The exhibit has an introductory as well as three main sections:The introductory area presents the Psalms Scroll, the largest of the scroll fragments in the exhibition,and touches on the geographical and religious contexts of the period."The Qumran Community" examines the region in which the scrolls were found, presents thearchaeological materials uncovered at the Qumran site, and explores the nature of the habitation adjacentto the scroll-bearing caves.The "Qumran Library" is a look at the various scrolls that were discovered in the Dead Sea caves."Two Thousand Years Later" explores the significance of the scrolls to modern scholarship and presentssome of the questions and controversies that surround them.The storyline for the exhibition includes not only interpretation of the scrolls, their meaning and

significance, it also deals, to the extent it has been explored by scholars, with the history and socialrealities of the people and the times that produced the scrolls. Recent publications on the exhibitedscrolls are included throughout the exhibition. Finally, the exhibition presents differing views wherethey occur. For example, the Qumran excavation is viewed by many as the site of a communal religioussect, probably the Essenes. The exhibition explores this interpretation but also presents entirely differentpoints of view.In the exhibition, B.C.E. (Before the Common Era) and C.E. (Common Era) are alternate designationsfor B.C. and A.D. The exhibition contains other words, terms, and references that may need definition orexplanation. Such terms are explained the first time they occur in the exhibition. This online exhibitincludes a full glossary of such terms as well as the exhibit brochure.Go to the Next Section of Scrolls from the Dead SeaTable of Contents

Scrolls From the Dead Sea:The Ancient Library of Qumran and Modern ScholarshipTHE WORLD OF THE SCROLLSIn 1947, young Bedouin shepherds, searching for a stray goat in the Judean Desert, entered a longuntouched cave and found jars filled with ancient scrolls. That initial discovery by the Bedouins yieldedseven scrolls and began a search that lasted nearly a decade and eventually produced thousands of scrollfragments from eleven caves. During those same years, archaeologists searching for a habitation close tothe caves that might help identify the people who deposited the scrolls, excavated the Qumran ruin, acomplex of structures located on a barren terrace between the cliffs where the caves are found and theDead Sea. Within a fairly short time after their discovery, historical, paleographic, and linguisticevidence, as well as carbon-14 dating, established that the scrolls and the Qumran ruin dated from thethird century B.C.E. to 68 C.E. They were indeed ancient! Coming from the late Second Temple Period,a time when Jesus of Nazareth lived, they are older than any other surviving manuscripts of the HebrewScriptures by almost one thousand years.Since their discovery nearly half a century ago, the scrolls and the identity of the nearby settlement havebeen the object of great scholarly and public interest, as well as heated debate and controversy. Whywere the scrolls hidden in the caves? Who placed them there? Who lived in Qumran? Were itsinhabitants responsible for the scrolls and their presence in the caves? Of what significance are thescrolls to Judaism and Christianity?This exhibition presents twelve Dead Sea Scroll fragments and archaeological artifacts courtesy of theIsrael Antiquities Authority as well as supplementary materials from the Library of Congress. It isdesigned to retell the story of the scrolls' discovery; explore their archaeological and historical context;introduce the scrolls themselves; explore the various theories concerning the nature of the Qumrancommunity; and examine some of the challenges facing modern researchers as they struggle toreconstruct the scrolls from the tens of thousands of fragments that remain.Go to the Next Section of Scrolls from the Dead SeaTable of Contents

Scrolls From the Dead Sea:The Ancient Library of Qumran and Modern ScholarshipTHE DEAD SEAThe Dead Sea is located in Israel and Jordan, about 15 miles east of Jerusalem. It is extremely deep(averaging about 1,000 feet), salty (some parts containing the highest amount of salts possible), and thelowest body of water in the world. The Dead Sea is supplied by a number of smaller streams, springs,and the Jordan River.Because of its low elevation and its position in a deep basin, the climate of the Dead Sea area is unusual.Its very high evaporation does produce a haze yet its atmospheric humidity is low. Adjacent areas to itare very arid and favorable for the preservation of materials like the Dead Sea Scrolls.The Bible's description, in Genesis 19, of a destructive earthquake near the Dead Sea area during thetime of Abraham is borne out by archaeological and historic investigation. While no evidence remains ofthe five cities of the plain (Zeboim, Admah, Bela or Zoar, Sodom, and Gomorrah) their sites arebelieved to be beneath the waters at the southern end of the sea.Archaeological sites near the Dead Sea include Masada, Ein Gedi, and Qumran (where the Dead SeaScrolls were found).Map of the Dead Sea RegionGo to the Next Section of Scrolls from the Dead SeaTable of Contents

Scrolls From the Dead Sea:The Ancient Library of Qumran and Modern ScholarshipINTRODUCTION:SCROLLSThis scroll fragment was displayed in the exhibit at the Library of Congress, May-August 1993. It wasprovided courtesy of the Israel Antiquities Authority. The exhibit caption and translation providebackground on the fragment and its relationship with the other Dead Sea Scrolls, the QumranCommunity, and its Library.The Psalms ScrollThe Psalms Scroll (black & white)The Psalms Scroll (color)The Psalms Scroll (color, with transcription)Translation of the Psalms ScrollTehillim11QPsParchmentCopied ca. 30 - 50 C.E.Height 18.5 cm (7 1/4 in.), length 86 cm (33 3/4 in.)Courtesy of the Israel Antiquities Authority (5)This impressive scroll is a collection of psalms and hymns, comprising parts of forty-one biblical psalms(chiefly form chapters 101-50), in non-canonical sequence and with variations in detail. It also presentspreviously unknown hymns, as well as a prose passage about the psalms composed by King David.

One of the longer texts to be found at Qumran, the manuscript was found in 1956 in Cave 11 andunrolled in 1961. Its surface is the thickest of any of the scrolls--it may be of calfskin rather thansheepskin, which was the more common writing material at Qumran. The script is on the grain side ofthe skin. The scroll contains twenty-eight incomplete columns of text, six of which are displayed here(cols. 14-19). Each of the preserved columns contains fourteen to seventeen lines; it is clear that six toseven lines are lacking at the bottom of each column.The scroll's script is of fine quality, with the letters carefully drawn in the Jewish book-hand style of theHerodian period. The Tetragrammaton (the four-letter divine name), however, is written in the paleoHebrew script.Reference:Sanders, J. A. The Psalms Scroll of Qumran Cave 11 (11QPs[superscript]a). Discoveries in theJudaean Desert, IV. Oxford, 1965.Go to the Next Section of Scrolls from the Dead SeaTable of Contents

Scrolls From the Dead Sea:The Ancient Library of Qumran and Modern ScholarshipINTRODUCTION:ARTIFACTS FROM THE QUMRAN SITEThese artifacts from the Qumran Site were included in the exhibit at the Library of Congress, May August 1993. They were provided courtesy of the Israel Antiquities Authority. The exhibit captionsprovide background on the objects and their relationship with the Dead Sea Scrolls, the QumranCommunity, and its Library.Scroll JarJar with LidPotteryFirst century B.C.E.-first century C.E.Some of the scrolls found by Bedouin shepherds in 1947 were discovered in cylindrical pottery jars ofthis type, which are unknown elsewhere. Many authorities consider the discovery of these uniquevessels in the Qumran excavations as well as in the caves, as convincing evidence of the link betweenthe settlement and the caves. These jars, like the other pottery vessels recovered at Qumran, wereprobably manufactured locally.KhQ 1474Lid: Height 5 cm (2 in.), diameter 17.8 cm (7 in.)Jar: Height 49.8 cm (19 1/2 in.), diameter 24 cm (9 3/8 in.)Courtesy of the Israel Antiquities Authority (57, 58)

TextilesThe textiles shown here are two out of scores of pieces collected together with scrolls and other objectsfrom the floor of the Qumran Cave 1 in the spring of 1949. The textiles were examined at the H. M.Norfolk Flax Establishment in England, and the material was identified as linen. A total of seventyseven pieces, plain and decorated, were cataloged and described by the renowned textile expert GraceM. Crowfoot.It is possible that all of the cloths found at Qumran are linked with the scrolls. Some of them werecertainly scroll wrappers; the remains of one scroll was found wrapped in a small square of linen. Othercloths, found folded into pads, may have formed a packing for worn-out scrolls inside the scroll jars.Still other pieces--with corners twisted or bound with linen cord--may have been used as protectivecovers, tied over the jar tops.The wrapped scrolls may have been concealed in the cave at a time of national panic or simply buried,as was a common practice, when they wore out. The condition of the cloths would coincide with eithersuggestion.Reference:Crowfoot, G. M. "The Linen Textiles." In Qumran Cave I. Discoveries in the Judaean Desert, I,pp. 18-38. Oxford, 1955.Linen ClothFirst century B.C.E.-first century C.E.This cloth is cut along three sides, rolled and oversewn with a single thread; the fourth edge has a cordedstarting border in twining technique, followed by a woven strip and an open unwoven space. It wasfound folded into a pad and was probably used as packing material for discarded scrolls.7Q, cloth 30Length 35.5 cm (13 7/8 in.), width 24 cm (9 3/8 in.)Counts: 14x14, 13x13, and in one place 16x14 threads per cmCourtesy of the Israel Antiquities Authority (76)Reference:Discoveries in the Judaean Desert, I, pp. 33-34. Oxford, 1955.

Linen ClothFirst century B.C.E.-first century C.E.The edges of this cloth are cut, rolled, and whipped on two opposite sides with single thread. On theother two sides, a double thread was used. Two corners are twisted, and the third has a piece of stringknotting it, indicating that it was probably used as a cover for a scroll jar.1Q, cloth 15Length 29 cm (11 15/16 in.), width 25 cm (9 3/4 in.)Counts: 17x13 threads per cmCourtesy of the Israel Antiquities Authority (75)Reference:Discoveries in the Judaean Desert, I, pp. 33-34. Oxford, 1955.Leather Scroll FasteningsTabsThongsFirst century B.C.E.-first century C.E.Tabs and thongs like these may have been used to bind and secure individual scrolls. The fasteningmethod is thought to consist of a slotted tab folded over the edge of the scroll (see "Prayer for KingJonathan" scroll fragment) with a thong inserted through the tab's slot. The thong then could be tiedaround the scroll. Fasteners were generally made of leather and were prepared in different sizes. Theleather thongs may have

The Psalms Scroll . about the secrets the scrolls might reveal, and about the intentions of the scrolls' custodians in restricting access. The Library's exhibition describes the historical context of the scrolls and the Qumran community from whence they may have originated; it also relates the story of their discovery 2,000 years later. In addition, the exhibition encourages a better .