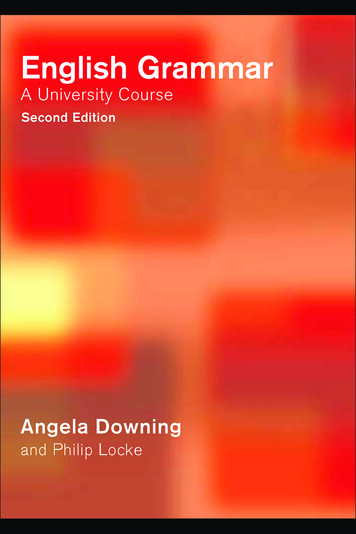 ENGLISH GRAMMARThis new edition of Downing and Locke’s award-winning text-book has been thoroughlyrevised and rewritten by Angela Downing to offer an integrated account of structure,meaning and function in relation to context. Also used as a reference book, it providesthe linguistic basis for courses and projects on translation, contrastive linguistics,stylistics, reading and discourse studies. It is accessible and reader-friendly throughout.Key features include: Chapters divided into modules of class-length materialsEach new concept clearly explained and highlightedAuthentic texts from a wide range of sources, both spoken and written, to illustrategrammatical usageClear chapter and module summaries enabling efficient class preparation andstudent revisionExercises and topics for individual studyAnswer key for analytical exercisesComprehensive indexSelect bibliographySuggestions for further readingThis up-to-date, descriptive grammar is a complete course for ﬁrst degree and postgraduate students of English, and is particularly suitable for those whose native languageis not English.Angela Downing is Professor Emeritus in the Department of English Language andLinguistics (English Philology I) at the Universidad Complutense, Madrid.The late Philip Locke taught at the Institute of Modern Languages and Translation atthe Universidad Complutense, Madrid.

First published 1992by Prentice Hall International (UK) LtdRoutledge edition published 2002 by RoutledgeThis second edition published 2006by Routledge2 Park Square, Milton Park, Abingdon, Oxon OX14 4RNSimultaneously published in the USA and Canadaby Routledge270 Madison Ave, New York, NY 10016Routledge is an imprint of the Taylor & Francis Group 2006 Angela Downing and Philip LockeThis edition published in the Taylor & Francis e-Library, 2006.“To purchase your own copy of this or any of Taylor & Francis or Routledge’scollection of thousands of eBooks please go to www.eBookstore.tandf.co.uk.”All rights reserved. No part of this book may be reprinted or reproducedor utilised in any form or by any electronic, mechanical, or othermeans, now known or hereafter invented, including photocopying andrecording, or in any information storage or retrieval system, withoutpermission in writing from the publishers.British Library Cataloguing in Publication DataA catalogue record for this book is available from the British LibraryLibrary of Congress Cataloging in Publication DataA catalog record for this book has been requestedISBN10: 0–415–28787–1ISBN10: 0–415–28786–3ISBN13: 9–78–0–415–28787–6 (pbk)ISBN13: 9–78–0–415–28786–9 (hbk)

This book is for:Enriqueand to the memory of Philip Locke

8 Talking about events: The Verbal GroupModule 37Module 38Module 39Module 40315Expressing our experience of eventsBasic structures of the Verbal GroupOrganising our experience of eventsThe semantics of phrasal verbs317323331336343343Further readingExercises9 Viewpoints on events: Tense, aspect and modality350Module 41 Expressing location in time through the verb: tenseModule 42 Past events and present time connected: Present Perfectand Past Perfect361369379394394Module 43 Situation types and the Progressive aspectModule 44 Expressing attitudes towards the event: modalityFurther readingExercises10 Talking about people and things: The Nominal Group399Module 45 Expressing our experience of people and thingsModule 46 Referring to people and things as deﬁnite, indeﬁnite,Module 47Module 48Module 49Module 50401genericSelecting and particularising the referent: the determinerDescribing and classifying the referent: the pre-modiﬁerIdentifying and elaborating the referent: the post-modiﬁerNoun complement clausesFurther readingExercises11 Describing persons, things and circumstances: Adjectivaland Adverbial groupsModule 51Module 52Module 53Module 54Module 55Module 56417423435446457462462473Adjectives and the adjectival groupDegrees of comparison and intensiﬁcationComplementation of the adjectiveAdverbs and the adverbial groupSyntactic functions of adverbs and adverbial groupsModiﬁcation and complementation in the adverbial groupFurther readingExercises12 Spatial, temporal and other relationships: The PrepositionalPhraseModule 57 Prepositions and the Prepositional PhraseModule 58 Syntactic functions of the Prepositional PhraseModule 59 Semantic features of the Prepositional NTSix

FOREWORDIt is now 13 years since the publication of Angela Downing and Philip Locke’s A UniversityCourse in English Grammar, which broke new ground by offering to advanced studentsof English a comprehensive course, based on Halliday’s Systemic Functional Grammar.It went beyond the merely structural, to present an integrated account of structure andfunction, which gives students the information they need in order to link the grammarof English to the overall structure of discourse and to the contexts in which it is produced.Ever since its publication, the book has been used in many countries in South America,the Middle East and Europe, including of course Spain, to whose tertiary educationsystems both authors devoted the majority of their working lives. Downing and Locke’sgrammar, while clearly rooted in Hallidayan linguistics, also responds to a number ofother inﬂuences, including the grammars of Quirk and his colleagues. However, it alsomade its own important contribution to our knowledge and understanding of manypoints of English grammar, and has been widely cited by scholars working withinfunctional linguistics.Sadly, Philip Locke died in 2003, but he would, I am sure, have been very proud ofthis new edition of the work, which still bears his name and has been retitled as EnglishGrammar: A University Course. The new version of the grammar embodies three themesevident in Angela Downing’s research work over the last decade or so, themes whichreflect the directions in which functional linguistics has moved in the late twentiethcentury and the beginning of the twenty-ﬁrst.First, the linking of grammar to the structure and functioning of discourse, alreadyevident in the ﬁrst edition, has been taken still further, giving students an even bettergrasp of aspects of text production in which even advanced foreign learners of Englishare often rather weak.Second, the account of English grammar offers benefits from the recognitionthat discourse is not a static product, but a constantly changing, negotiated process:as interaction proceeds, interlocutors build up and modify mental representations oftheir addresses, the context and the discourse itself. This perspective on language leadsto the integration, within this new version of the grammar, of ideas from cognitivelinguistics.Finally, although the ﬁrst edition of the grammar drew on a wide range of sources toshow language in use, the new edition makes considerable use of examples from thelarge corpora now available for searching by computer (notably the 100-million-wordBritish National Corpus), as well as other textual materials collected by Angela Downing.

The result is that the grammar is attractively illustrated by authentic text samples frommany registers of English, ranging from very informal conversation through to moreformal productions.This new version of the Downing and Locke grammar will serve not only as a coursebook for new generations of advanced students of English, but also as a referencesource for students, teachers and researchers looking for a detailed treatment of Englishgrammar which integrates structural, functional and cognitive perspectives into acoherent and satisfying whole.Christopher ButlerHonorary ProfessorUniversity of Wales SwanseaxiiFOREWORD

PREFACE TO THE SECOND EDITIONThe structure of this book remains essentially the same as that of the ﬁrst edition. Themost obvious difference is the collapsing of chapters 11 and 12 into one (adjectival andadverbial groups), leaving 12 (prepositions and the prepositional phrase) as the ﬁnalchapter. Following the welcome feedback from reviewers and consultants, there hasalso been some rearrangement of the material: in particular, the section on negationhas been brought forward to Chapter 1, and the syntax of prepositional and phrasal verbsis made more explicit in Chapter 2. Chapter 5 has also been rearranged, in order to clarifythe correspondences between clause types and their speech act functions.Some of the modules have been considerably rewritten, in order to accomodate thedescription of certain elements that had not been dealt with. Still others were partlyrewritten in order to incorporate certain insights and research ﬁndings published since1990 or, if earlier, not included in the ﬁrst edition. The motion event analysis in Chapter8 is one of these, and the semantics of prepositions in Chapter 12 is another. A fewanalytical changes have been made, notably the re-analysis of those features that weregrouped together under the function labelled ‘predicator complement’. This re-analysishas been made possible by a clearer specification of the criteria adopted for theclassiﬁcation of clause constituents.A considerable number of new textual illustrations have been incorporated, replacingsome of the previous ones. Also introduced are sections on further reading and a selectbibliography.Our debts to our predecessors in writing this second revised edition are clearlynow more numerous and greater than before. In addition to the wealth of informationand accurate detail of the various grammars by Randolph Quirk, Sydney Greenbaum,Geoffrey Leech and Jan Svartvik, we now have the new dimensions provided by theLongman Grammar of Spoken and Written English (Douglas Biber, Stig Johansson, GeoffreyLeech, Susan Conrad and Edward Finegan) and the Cambridge Grammar of the EnglishLanguage (Rodney Huddleston and Geoffrey K. Pullum, together with their collaborators).Their inspiration will be evident in many of the chapters in this book. The insights ofMichael Halliday were influential in the first edition and they are still present, butonce again with certain modiﬁcations that Halliday may not agree with, modiﬁcationsmade in order to suit the rather different learning objectives of many of our readers.Unfortunately, the third edition of An Introduction to Functional Grammar became availableonly after the relevant chapters of this book had been completed.Reference to individual publications cannot be made in this paragraph, but all worksconsulted are reﬂected in the select bibliography and many in the sections on furtherreading.

Among the many consultants, friends and colleagues who have made helpful commentson the previous edition, I would especially like to thank Andrei Stoevsky (University ofSofia), who made detailed comments on every chapter, and Chris Butler (Universityof Wales Swansea) who has given invaluable assistance and advice through twoeditions of this book. Also much appreciated were the many useful comments made byMike Hannay and Lachlan Mackenzie (Free University, Amsterdam), Ana Hansen(Universidad Nacional de Cuyo, Mendoza), Mohsen Ghadessy (University of Brunei),Martin Wynne (University of Oxford), Belinda Maia (U

A COURSE BOOK IN ENGLISH GRAMMAR

Basic Italian: A Grammar and Workbook

Answers for the Grammar Land Worksheets - Easy Peasy All .