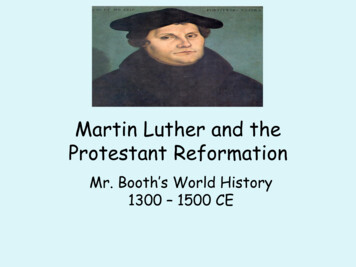 I Indulgences A monk/friar namedJohann Tetzel was raising“something.” “As soon as the coin in the cofferrings, right then the soul toheaven springs” What was he selling? Heaven To raise money he soldIndulgences: Certificatesof Pardon to absolve sin Who would this anger?

M Merchants Merchants or Italian businessmen andwomen want usury. What is this? Usury lending money & charginginterest 5% or 5 points for a loan.– Church says usury is wrong Is thisHypocritical?Q: Who would this anger?

A Absolute Power andWealth of Church Q. Why was the Catholic Church so powerfulin Europe?1. For many, church represented a chance forpeople to go to heaven.2. Pope had power over the king because of thethreat of excommunication.

D Domination of theChurch by Italians(Germans/English are mad) People of Germany and England resentedpaying taxes to Rome because they thoughtthe Catholic Church did nothing for them. They said “Rome was way down there, andwe’re way up here.” What can you conclude about I.M.A.D.?

FUNMartin Luther: His 3 Ideas in the 95Theses were F.U.N.The Church Didn’t Think it was FUN1. Faith only saves people - not good works-Catholic church salvation by following church-Q: Who will not like this idea of Luther’s? Why?2. Ultimate authority for Christians Bible-Q: Who will this anger? Who did Catholics think was theauthority?-Catholic Church says Pope is Ultimate Authority3. Nobody is more important in God’s eyes-All people with faith are equal. Therefore, people did not needpriest to interpret the Bible for them.

Henry VIII King of England in 1509(devout Catholic) Wife - Catherine of AragonDaughter - Mary– but no woman eversuccessfully claimed theEnglish throne. He wants a son!– so he asked the Pope to annulor cancel his marriage, Popesays no

John Calvin B. 1509 in From France Broke from Catholic Church andstarted his own denomination. Greatly influenced FrenchHuguenots (French Protestants)toquestion French government– (French Gov. is Catholic) Published Institutes of the ChristianReligion– Laid the foundation for the following:

Calvin’s Ideas P- Calvin said that very few people are savedby God called the “elect”. The belief that God has known since the beginning of timewho will be saved is called predestinationO- Our moral lives reveal if we’re chosen by GodW – Work ethic than honors God

Legacy of the Reformation Huge impact. It set the stage for the modernworld and ended the Christian unity of Europeand left it culturally divided. R More schools were established – faithbased high schools and colleges P – Individual countries formed beganbecause Europe was no longer united by faith

TIMELINE OF THE PROTESTANT REFORMATION

The Life, Times, and Theological Method of John Calvin