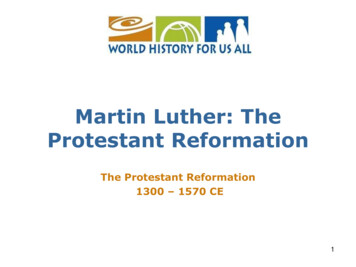 Who was Martin Luther? Born in Germany in1483. After surviving aviolent storm, hevowed to become amonk. Lived in the city ofWittenberg. Died in 1546.

Papal SchismRomeAvignon In 1301, the king tried to tax the French clergy. The pope threatened to excommunicate the king andso was arrested. He was later released. The next pope, Clement V, moved the headquartersof the Church from Rome to Avignon in southernFrance. Many people felt that the French kings controlled theChurch.

Three Popes! The next six popes lived in Avignon. PopeGregory then moved the papacy back toRome in 1377. When Gregory died, the French cardinalsdid not like the new pope in Rome, so theyelected a different pope in Avignon. Later, a Church council elected a thirdpope.

Excommunication Pope Leo X demanded that Luther recant 41of his Ninety-Five Theses. Luther was brought before the Diet ofWorms. In January 1521, Luther wasexcommunicated from the Church.

Language Barriers Most uneducated people didn’tunderstand Latin, but knew the localcommon language or “vernacular”.– Almost all Bibles were written inLATIN before the Reformation. It was the job of the church clergy totranslate the Bible to lay people.

A New Church Luther soon had manyfollowers. His supporters began toorganize a new Christiandenomination. Several German princessupported Luther. Lutherans and Catholicsfought each other. The first wars ended with theTreaty of Augsburg, butfighting in Europe overreligion continued to the midseventeenth century.Saint Bartholomew’sDay massacrein 1572 was a targeted group of assassinations and a wave of Catholic mob violence,directed against the Huguenots (French Calvinist Protestants) during the French Wars ofReligion.

In England, theReformation began with theKing! King Henry VIII–The king who had six wives He wants a SON!Lines provided in notes towrite down story of KingHenry VIII.

The ReformationParliament Was a gathering that led to the decision thatEngland was no longer under the authorityof the pope. Act of Supremacy– Subjects were required to take an oathdeclaring Henry VIII to be “SupremeHead of the Church of England”

Longstanding Effects of Henry VIII His legitimate children: Mary, Elizabeth, andEdward (dies).– Queen Mary I or “Bloody Mary” Raised Catholic like her mother Catherineof Aragon; she reestablished the CatholicChurch in England. She killed manyprotestants and had approximately 300heretics burned at the stake.– Queen Elizabeth I (Ends the House of Tudor) Raised Protestant and ruled England for44 years. Ruled during the SpanishArmada, and never married known as theVirgin Queen.

The Inquisition - a Catholic judicial systemdesigned to prosecute heretics

Legacy of The Reformation:Big ideas1. Religion no longer unitedEurope2. Growth of monarchs andmodern nation states over theChurch3. Groundwork for the rejectionof Christian beliefs andcontinued questioning of theworld around us

A New Church Luther soon had many followers. His supporters began to organize a new Christian denomination. Several German princes supported Luther. Lutherans and Catholics fought each other. The first wars ended with the Treaty of Augsburg, but fighting in Europe over

TIMELINE OF THE PROTESTANT REFORMATION