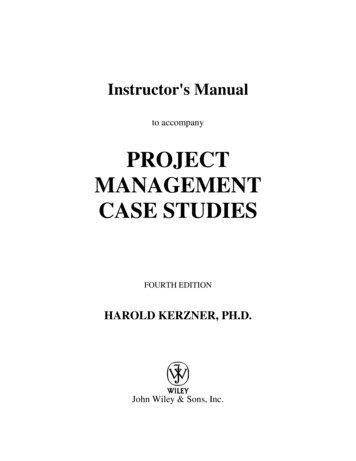 Teaching Note:Creating a MethodologyQuestions:1. What can you determine about the corporate culture from the fact thatthey waited this long to consider the development of an EPM system?It looks like the corporate culture focuses heavily upon power and authority.There is an inherent fear that whichever executive gets control of the EPMsystem will become more powerful than other executives.2. Can a PMO accelerate the implementation process?A PMO can shorten the EPM development and implementation by at least oneyear, especially if the PMO reports high up in the company.3. Is it acceptable for the PMO to report to the Chief Information Officer orto someone else?PMOs typically report to someone at the “C’ level of the organization; CEO,COO, CIO, or CFO. If the PMO reports lower, it may lack the necessary clout toget their job done.4. Why is it best to have six or less life cycle phase in an EPM system?Having six or less life cycle phases is best. Having more than six life cycle phasecan create unnecessary work.5. Is it best to design an EPM system around flexible or inflexibleelements? Generally, when first developing an EPM system, do companiesprefer to use formality or informality in the design?Methodologies work best when there is a good amount of flexibility built into themethodology. However, most companies that just start out developing amethodology usually focus on rigid policies and procedures. The exception iswhen you have a PMO in place, in which case you may be able to begin with amore informal system.6. Should an EPM system have the capability of capturing best practices?Today, best practices are viewed as competitive weapons. As such,methodologies must have the necessary documentation to extract these bestpractices during the project or at the completion of the project.

Teaching Note:Honicker CorporationQuestions:1. What are Honicker’s options now?Honicker has only two choices: they must either win the support of thecompanies or they can act as a landlord and force the resolution of the problemin their favor. Forcing the issue come with risks of alienation and lack of support.The best option would be for Honicker to use effective stakeholder relationsmanagement techniques and try to win their support.2. What would you recommend that Honicker do first?To win their support, they must first understand the problem. It may be necessaryto hold project management seminars and education the possible non-supporterson the value of project management and the importance of a good projectmanagement methodology.3. What if, after all attempts, Gamma and Delta companies refuse to comeon board?At this point, there may be no options left other than to force the issue. Ifresistance is still expected, then it may be necessary to replace seniormanagement in some of the acquired companies with Honicker employees.4. What if Alpha Company is adamant that their approach is best andrefuses to budge?If Alpha Company has a proven record of success in the use of their ownmethodology, then Honicker should be open-minded and understand thatperhaps a reasonable compromise is in order. It is entirely possible that AlphaCompany’s methodology is superior to that of Honicker’s and Honicker shouldconsider this.5. What if Gamma and Delta Companies argue that their clients andstakeholders have not readily accepted the project managementapproach and they wish to be left alone with regard to dealing with theirclients?This is a bad situation. Honicker may have to force them to accept and use theEPM system. It may be a good idea to offer project management training to theclients of Gamma and Delta Companies as well. All of the companies must agreeto and use the methodology.

6. Under what conditions would Honicker decide to back away and let eachcompany do its own thing?In some countries, project managers are viewed as a threat to seniormanagement, and some stakeholders may believe that the project managers donot sit high enough in the organization in order to interface with them. If thecompany is highly successful, and their clients are adamant about not wanting touse an EPM system, Honicker may have to make a concession.7. How easy or difficult is it to get several companies geographicallydispersed to agree to the same culture and methodology?It is common practice for corporate to want to have all divisions or satellitecompanies manage with the same tools. But this is often dependent on thestrength and importance of the culture where the company must perform andinterface. Honicker can replace senior management in these companies withtheir own personnel, especially if senior management is composed of nationals.But there is a risk in doing this especially if it alienates local clients to the pointwhere they might seek out other suppliers.8. If all four companies were willing to cooperate with one another, howlong do you think it would take for an agreement on and acceptance touse the new EPM system?Two years is probably correct given the project management maturity level ofthese companies. Parts of this case study are factual, and it took the parentcompany two years to get everyone to agree to a common methodology.9. Which stakeholders may be powerful and which are not?It is impossible to tell which stakeholders are powerful. Alpha Company hasproject management expertise, so they may be able to exert some type of power.10. Which stakeholder(s) may have the power to kill this project?This is a tough question. As long as Honicker is in the ‘driver’s seat’, onlyHonicker has the power to kill the project. Some satellite companies may refuseto participate, but cannot kill the project.11. What can Honicker do to win their support?Honicker must demonstrate a willingness to listen to their arguments andcompromise if necessary. Honicker may also wish to set up project managementeducational programs, or at least a training course on Honicker’s existingmethodology. Alpha Company should also have the right to educate people ontheir methodology and then let people decide which approach is better.

12. If Honicker cannot win their support, then how should Honicker managetheir opposition?This is the point in time where the landlord may have to exert their control overthe tenants.13. What if all four companies agree to the project managementmethodology and then some of the client stakeholders show a lack ofsupport for use of the methodology?This could very well be the worse possible situation. Honicker may have to offertraining to the clients in order for them to see the benefits of using the EPMsystem. If that doesn’t work, it may be necessary to allow different forms ofproject management to exist within the same company.