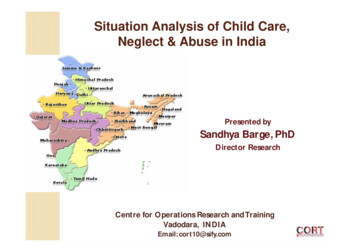 Children in India: Critical concerns 42% (440 million) of India’s total population areaged below eighteen.Every fifth child in the world lives in IndiaEvery third malnourished child in the world lives inIndiaEvery second Indian child is underweight.Three out of four children in India are anaemicChildren born with low birth weight are 46%Immunization coverage is very lowGirls’ enrolment in schools at primary level is 48 %

Child Abuse: India - 2007Ministry of Women and Child Development, Government of India Conducted in 13 states (2007)Sexual Abuse among Children53 percent of children reported having faced sexualabuse 53 percent were boys 47 percent were girlsChildren on the street, at work and in institutionalcare reported the highest incidence of sexualassault.Andhra Pradesh, Assam, Bihar and Delhi hadhighest percentage of sexual abuse and assault

Trafficking in Women and Childrenin India, 2005 44,500 children were reported to be missing India is major source as well as destination fortrafficked children Around 500,000 girl children are in commercialsex and organised prostitution.

OTHER EMPIRICAL RESEARCH EVIDENCESAmong street girls 39 percent were raped before they were 10years old (Tata Institute of Social Sciences,Mumbai - 1999) Among School Children 63 per cent of girls abused by family member 25 per cent raped in 30 per cent it was done male friend offamily and other family members(Delhi-based Sakshi Violation Intervention Centre,1997)

Among College Students 1,000 upper and higher-middle class collegestudents interviewed, 76 per cent had been abused as children, 31 per cent known to that family 40 per cent by family member, and 50 per cent of them before the age of12 RAHI, Delhi-based organisation

Among BoysFamilies do not protect boys as much asgirls Sexual abuse of boys in school settings,particularly in residential schools, byteachers, school attendants Many sexually abused boys develop fearthat they are homosexuals themselves Migrant boys are doubly disadvantage

Profile of Boys Working in Prostitution Most were first sexually abused at age10 -13Half of them were illiterateNearly half had bad relationships with their familyHad left home because of physical abuse, poverty,alcoholism of father, broken familyPathways: odd jobs, initiation to sexual abuse ledthem to enter prostitutionBoys were initiated into this at ages 15-16Boys were mostly working in prostitution forwomen clients

Contributing factors (contd.)Children taught to obey adults implicitlyare abused by adults family members “Silence about sex" culture forbids parents from talking to their childrenabout sexuality frowns upon any non-sexual intimaterelationship with the opposite gender Even when children report abuses by familyelders parent tend to reject and advises themto keep quiet

Response to Sexual Abuse: IndianlegislationConstitution of India recognizes thevulnerable position of children andaccordingly makes provision for theirright to protection (in Articles 14,15,15(3), 19(1) (a), 21, 21(A), 23, 24, 39(e)39(f)) Ministry of Women and ChildDevelopment India is signatory to three internationalconventions on child rights

(contd.) In legislation ‘Sexual abuse’ per se is not defined Does not directly address child sexual abuse Cases of child sexual abuse are addressed underadult laws Addresses some forms of sexual abuse throughdiverse provisions found in Indian Penal Code 1860. Many of these provisions exclude boys IPC outlaws forcing or seducing a minor girl under18 into ‘illicit intercourse’ but it does not protectboys. IPC provides stringent measures to protect girlrape victims its protections for boy victims areinsufficient

Contd. Andhra Pradesh State made the offencecognisable, non-bailable with a minimumpunishment of seven years' imprisonment and afineGoa Children Act 2003 has made abuse a nonbailable offence under Section 2 (a) of theCriminal Procedure Code, 1973. Fines and jailterms are also severeNo other state has taken any initiativeBill is awaited in Parliament

PolicyNational Plan of Action for Children 2005(NPAC) more comprehensive against CSA Less discriminatory against boys Has limited goals, objectives and strategiesfor child pornography Intended to be administered through stateplans of action. Maharashtra, has developed state action planto address trafficking, Action plans to address child sexual abusehave not been formed in any state.

Contd.All children have the right to live in safety and dignity in aprotective and nurturing environment, both at home and inthe community.This could be achieved only by creating awareness of their rights, especially their right toprotection, among parents and other stakeholders, putting in place laws to punish those who abuse /exploitchildren Taking action to strengthen accountability on the part ofgovernment , NGOs and the civil society.

Situation analysis of the health sector - WHO