Introduction To The Open Source PV LIB For Python . 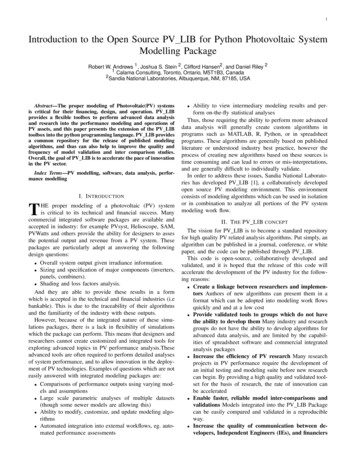 1Introduction to the Open Source PV LIB for Python Photovoltaic SystemModelling PackageRobert W. Andrews 1 , Joshua S. Stein 2 , Clifford Hansen2 , and Daniel Riley 21 Calama Consulting, Toronto, Ontario, M5T1B3, Canada2 Sandia National Laboratories, Albuquerque, NM, 87185, USAAbstract—The proper modeling of Photovoltaic(PV) systemsis critical for their financing, design, and operation. PV LIBprovides a flexible toolbox to perform advanced data analysisand research into the performance modeling and operations ofPV assets, and this paper presents the extension of the PV LIBtoolbox into the python programming language. PV LIB providesa common repository for the release of published modelingalgorithms, and thus can also help to improve the quality andfrequency of model validation and inter comparison studies.Overall, the goal of PV LIB is to accelerate the pace of innovationin the PV sector.Index Terms—PV modelling, software, data analysis, performance modellingI. I NTRODUCTIONHE proper modeling of a photovoltaic (PV) systemis critical to its technical and financial success. Manycommercial integrated software packages are available andaccepted in industry: for example PVsyst, Helioscope, SAM,PVWatts and others provide the ability for designers to assesthe potential output and revenue from a PV system. Thesepackages are particularly adept at answering the followingdesign questions: Overall system output given irradiance information. Sizing and specification of major components (inverters,panels, combiners). Shading and loss factors analysis.And they are able to provide these results in a formwhich is accepted in the technical and financial industries (i.ebankable). This is due to the traceability of their algorithmsand the familiarity of the industry with these outputs.However, because of the integrated nature of these simulations packages, there is a lack in flexibility of simulationswhich the package can perform. This means that designers andresearchers cannot create customized and integrated tools forexploring advanced topics in PV performance analysis.Theseadvanced tools are often required to perform detailed analysesof system performance, and to allow innovation in the deployment of PV technologies. Examples of questions which are noteasily answered with integrated modeling packages are: Comparisons of performance outputs using varying models and assumptions Large scale parametric analyses of multiple datasets(though some newer models are allowing this) Ability to modify, customize, and update modeling algorithms Automated integration into external workflows, eg. automated performance assessmentsTAbility to view intermediary modeling results and perform on-the-fly statistical analysesThus, those requiring the ability to perform more advanceddata analysis will generally create custom algorithms inprograms such as MATLAB, R, Python, or in spreadsheetprograms. These algorithms are generally based on publishedliterature or understood industry best practice, however theprocess of creating new algorithms based on these sources istime consuming and can lead to errors or mis-interpretations,and are generally difficult to individually validate.In order to address these issues, Sandia National Laboratories has developed PV LIB [1], a collaboratively developedopen source PV modeling environment. This environmentconsists of modeling algorithms which can be used in isolationor in combination to analyze all portions of the PV systemmodeling work flow. II. T HE PV LIB CONCEPTThe vision for PV LIB is to become a standard repositoryfor high quality PV related analysis algorithms. Put simply, analgorithm can be published in a journal, conference, or whitepaper, and the code can be published through PV LIB.This code is open-source, collaboratively developed andvalidated, and it is hoped that the release of this code willaccelerate the development of the PV industry for the following reasons: Create a linkage between researchers and implementors Authors of new algorithms can present them in aformat which can be adopted into modeling work flowsquickly and and at a low cost Provide validated tools to groups which do not havethe ability to develop them Many industry and researchgroups do not have the ability to develop algorithms foradvanced data analysis, and are limited by the capabilities of spreadsheet software and commercial integratedanalysis packages Increase the efficiency of PV research Many researchprojects in PV performance require the development ofan initial testing and modeling suite before new researchcan begin. By providing a high quality and validated toolset for the basis of research, the rate of innovation canbe accelerated Enable faster, reliable model inter-comparisons andvalidations Models integrated into the PV LIB Packagecan be easily compared and validated in a reproducibleway. Increase the quality of communication between developers, Independent Engineers (IEs), and financiers

2 By providing a common modeling platform for advanceddata analysis, the communication of complex data analysis can be simplified and shared in a reproducible way.Provide tools to efficiently handle large datasets Theanalysis of data on hourly or minutely timescales canprovide valuable insights into system performance, andspreadsheet programs are generally not able to handle thevolume of data associated with these datasets. Using efficient code and the ability to parallelize some operationsmeans that high resolution data can be analyzed.Collaboration can increase the pace of technologyinnovation in the sector Because the future expansionof PV LIB will be based on the contributions of thePV community, new analysis methodologies and bestpractices can be quickly adopted by the sector.III. T HE PV LIB PACKAGEThe PV LIB software package currently exists as a set ofPython and MATLAB scripts which perform system performance calculations, and represent a large portion of currentlypublished system performance and atmospheric functions.These algorithms can be used in isolation to investigatea certain portion of PV performance evaluation, or can beused in combination to fully simulate a PV array, and aresummarized in Table I.A. Python PV LIBThe Python programming language is a free and opensource programming environment which has been shown tobe very well suited to scientific computations [2], [3], [4]. Akey feature of Python is it’s flexibility to handle computationfrom small scale to large highly parallelized high performancecomputing operations [5] and because of this is able to scaleeasily, with no costs, to a users demands and requirements.In addition, the Python language is supported by a vibrant community of developers, and new features are activelyadded and maintained. Because of this, integration with web,database and graphically intensive processes are relativelysimple and intuitive in the system, allowing for a greaterflexibility when developing models and algorithms. [6]Python is also designed to be easily written and interpreted,and because of the high-level nature of the code is easilylearned and understood by those with a basic understandingof programming syntax.As PV LIB develops into the Python programming language, it will feature three main principles: Take advantage of the Python programming language, toensure free access to academic and commercial usersDesigned for collaborative development, and backed bya rigorous method to include the contributions of authorsand researchers into the packageBacked by a full testing and validation suite- to ensurestability of the package and to allow for validation ofmodel results against real-world performance data.IV. C OLLABORATIVE SOFTWARE DEVELOPMENTThe Python version of PV LIB will be designed and maintained to allow for collaborative development of the softwareusing the open source model. [7], [8]The full set of code is maintained on the Git Hub collaborative revision control system and it is possible for thoseinterested in using or modifying the code base to create a’fork’ of the code onto their local systems. The users can thenuse or modify the code on their local machines. If a bug isfixed or a new function is developed, a request can be madethrough the GitHub system to integrate it into the main codebase.Requests to merge a change into the code base are thenreviewed by the maintainers of the code, and if accepted canbe integrated and merged into the code of those utilizing thecode. At specified milestones, official version updates will bereleased which will integrate the latest updates into a downloadable package.A. User demographicsThere is a distinction made between two categories ofexpected users of the PV LIB package: Users and DevelopersUsers Users are concerned with using high level modulesto develop analysis workflows. They would take advantage ofpre-defined modules, but wouldn’t generally dive into theirback end function or development. It is assumed that theywill generally interact with PV LIB through the ’Ipythonnotebook’ environment, shown in Figure 1Developers Though developers would be interested in theend result of developing new analysis workflows, they wouldalso be concerned with the back end development of analysismodules. This would include the development of algorithmsand the creation of algorithmic and physical testing suites.B. Testing requirementsAlgorithms integrated into the PV LIB Python packagewill require algorithmic and physical testing packages. Thespecific requirements for these are published on the PV LIBwebsite.Algorithmic testing packages ensure that the module willoperate properly under all reasonable conditions imposed onit by users , including logical error handling.Physical physical testing should include a validationdataset which demonstrates the implied function of thealgorithm. This provides users with an accessible methodof ensuring the accuracy of results and ensuring thephysical validity of their models. Validation datasets must beincluded directly in the testing file, and should not rely onexternal datasets to ensure stability of the validation over time.In order to ensure repeatable results, a version trackingsystem is also included in PV LIB which will provide astandard method to document the algorithms and versionswhich were used in a particular simulation.

An introduction to Open Source Intelligence

A survey of open source tools for machine learning with .

{ROBBIT}: An Open Source Simulator for Education in Robotics